After taking the overnight bus from Flores, we arrived at Guatemala bus station at 5am and got onto a shuttle bus from there to Antigua around 6:30am. Once again my name proving too difficult to understand and there being a confusion as to who I was on the bus list which made the shuttle leave almost an hour late.

Driving into Antigua we immediately knew we were going to like it here. Cobbled streets with small colourful houses surrounded by volcanos. The bus dropped us off just down the road from the hostel we were staying at Hostel Tropicana. As we were about 5 hours early for check-in we dropped our bags off and headed out for an explore and some breakfast. 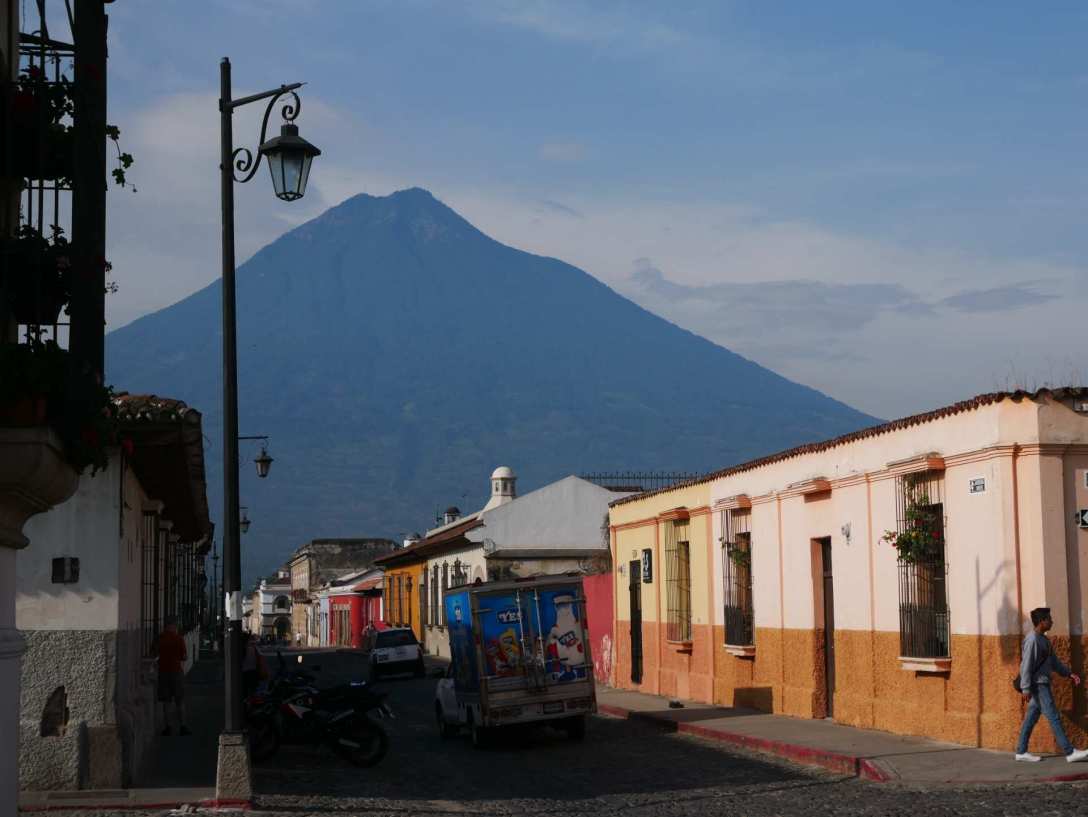 We walked over to the Parque Central and found a small cafe called La Casaca which offered two traditional breakfasts and coffee for 50 quetzals. We enjoyed some scrambled egg with tomato and onion, refried beans, bread and salsa sauce with a nice black coffee. After breakfast we walked down to the main market and had a walk through the maze that it is, stumbling upon everything you can possibly imagine from clothing and bags to spices and herbs. The markets were cheap and even cheaper if you bargain in your best Spanish, however the rest of Antigua is expensive as the town is very touristy.

Every Saturday night in Antigua there is a big party where travellers and locals descend upon what we thought was going to be an abandoned pool as we had been told. However, the party now takes places in some fields near the volcanos so you get a spectacular view at night of the eruptions. We went with some people from the hostel and a group that we previously met at Zephyr Lodge in Lanquin. You start drinking at the hostel and then move to a bar called ‘Lucky Rabbit’ before trucks and vans take you to the fields for the party. The music was great, the drinks cheap and even better there were food stalls for later at night. Needless to say the rest of the weekend was chilled before our early start on Monday for the beginning of our Spanish classes. 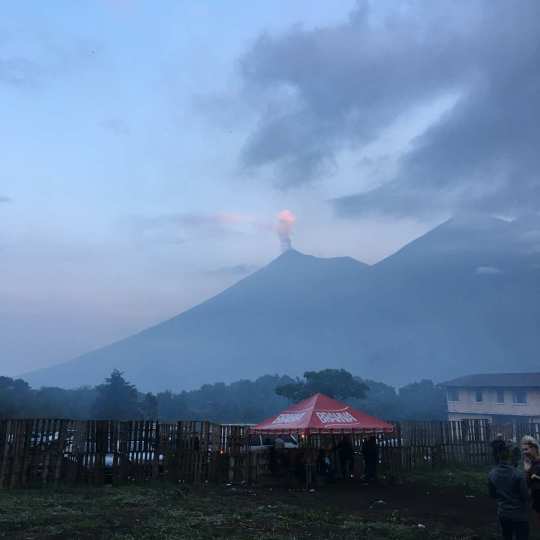 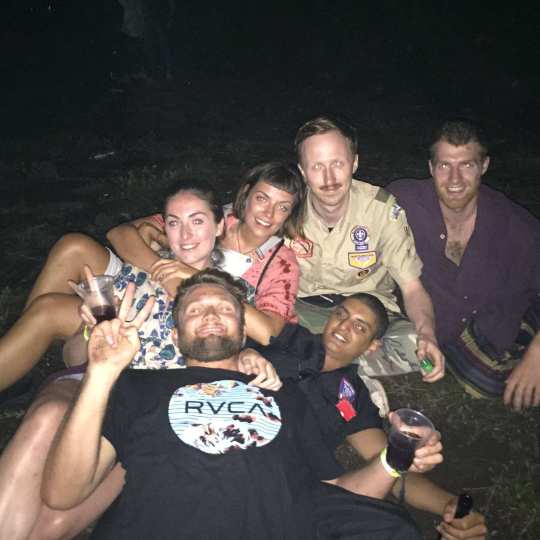 Monday morning we checked out of the hostel, got a quick traditional breakfast and made our way to the ‘Antigüeña Spanish Academy’ where we would be learning Spanish for the next 5 days. We got to the small office for 7:45AM and waited for our teachers to arrive at this point we were wondering where the classrooms could be in such a small building. We were each introduced to our teachers – Mayra and … – then we separately started to walk away from the schools office off in a direction we had yet to explore. After a 10 minute walk getting to know our teachers we walked through a huge metal gate into the most beautiful garden with flowers, trees and grass surrounding an old colonial building which had two huge balconies stretching around the garden edge. We were then taken to our own tables and we realised that this peaceful garden was to be the classroom for the week. 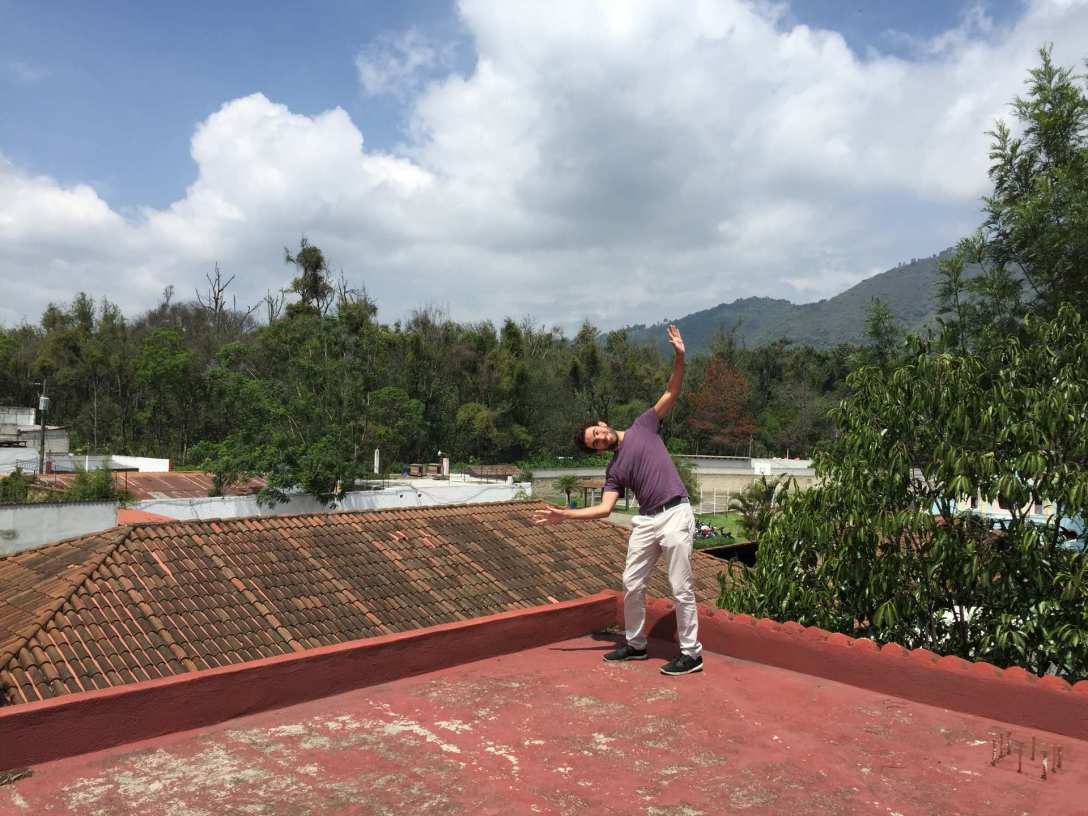 Another plus to the Spanish classes was the food they supplied at break time each day. At 10AM everyday a group of ladies would walk in with baskets filled with tostadas and empanadas. The tostadas and empanadas were then covered in guacamole, tomato, onions, pickled cabbage, coriander and two different salsa. Each item cost only 3Q (30p) and would fill you up for ages.

After our lessons had finished on Monday we picked our bags up from the hostel and made our way to the Airbnb where we would be staying for the rest of the week. The Airbnb was great as it meant we could have our own space to learn Spanish but also be social as it had a shared kitchen and living room with further guests staying there – overall there were 6 rooms. We decided we would cook breakfast and dinner for the week to keep it cheap so after we dropped the bags off we made our way to the supermarket to get supplies. That evening we cooked a tomato and vegetable spaghetti dish, did our homework and then slept.

For the rest of the week we were in school from 8 – 12 which flew by everyday and we spent the afternoons doing various other activities. A must do if you find yourself in Antigua is to walk up to ‘Cerro de la Cruz’ which is 330 steps up to a cross placed on the top of the hill and from here you have incredible views all across Antigua and the two volcanos. 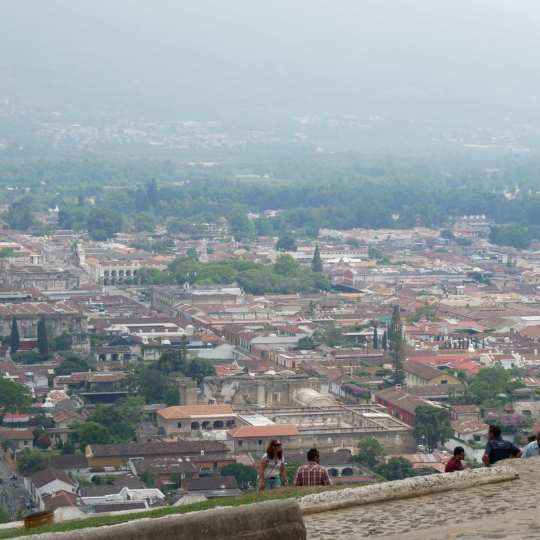 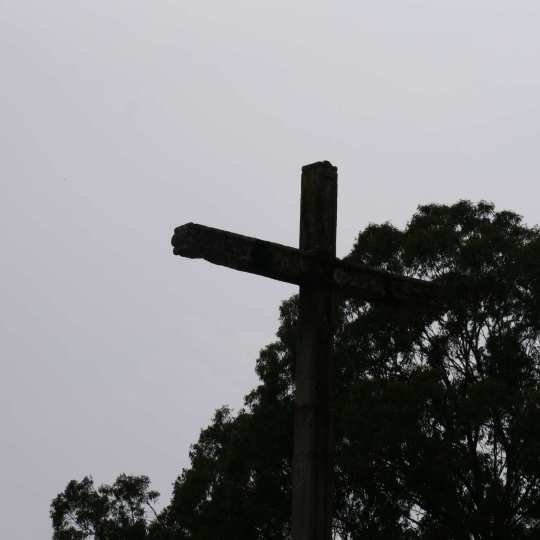 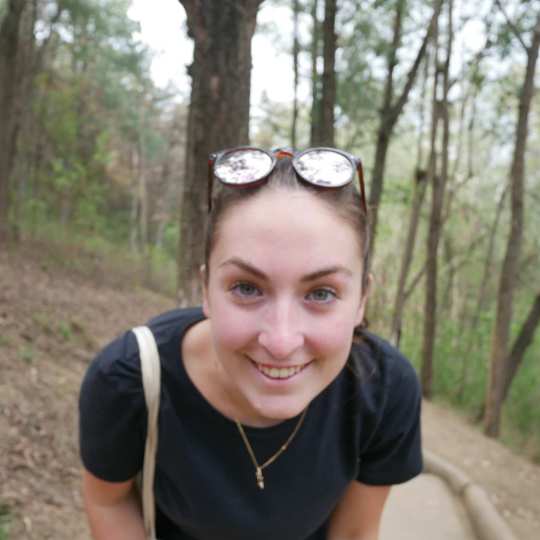 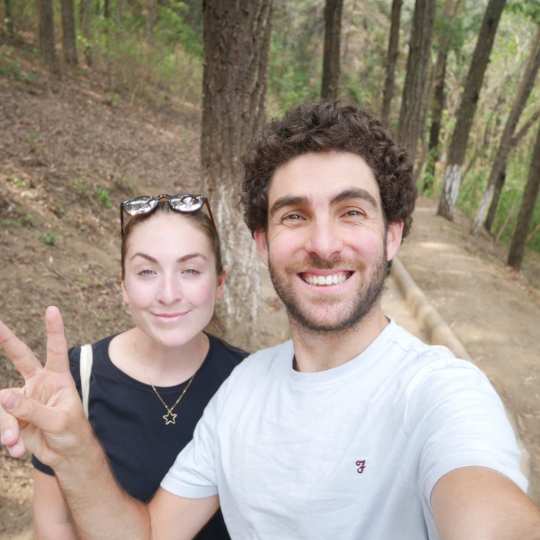 As we cooked our own breakfasts and dinners, we still ate out for lunch during the week. On Monday we went to the first curry house we’ve seen called Toko Baru. Stu had a beef madras and Niamh had an Indonesian beef dish, both were excellent and came with three different dips. On Tuesday we treated ourselves to sushi. We found a place doing 2 for 1 on sushi rolls. The free one had to be a California roll and we then chose a spicy tuna roll. Each roll has 10 pieces so we were very full after. The food only came to 65 quetzals which was a bargain and the sushi was excellent. On Wednesday we weren’t too hungry so we ended up getting a mini panini each with potato wedges to share. And finally on Thursday we got 2 for 1 bacon cheeseburgers from an English bar (shame on us we know) as they were great value for money and tasty. 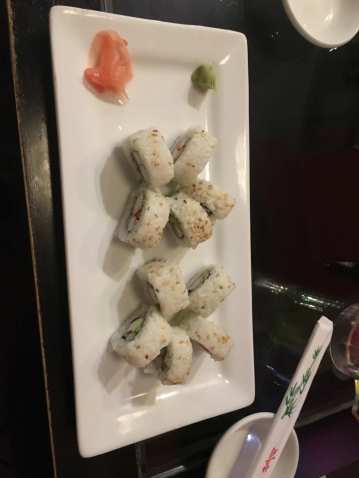 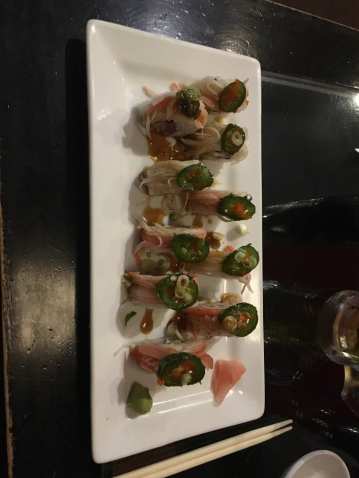 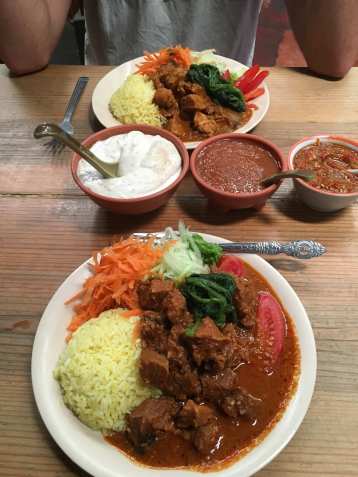 Straight after our classes finished on Friday we got a shuttle bus down to Lake Atitlan. The bus dropped us off at Panajachel, from here we got a small speed boat across the lake for 20 minutes before arriving at our destination in San Pedro La Laguna on the Eastern side of the gigantic lake.

Lake Atitlan is 130.1 km2, in other words, it’s absolutely huge. The maximum depth is also staggering at 340m. The lake is in a volcanic crater and the lake is completely surrounded by much higher volcanos. It completely justifies its reputation of one of the most if not the most stunning lakes in Central America. With it being surrounded by volcanos there are lots of activities to do. You can hike to the Indian Nose to watch the sunrise, hike the volcanos, visit the traditional market in Panajachel, paraglide and much more. We were wanting a relatively calm and easy going weekend so didn’t do many of the activities on hand. 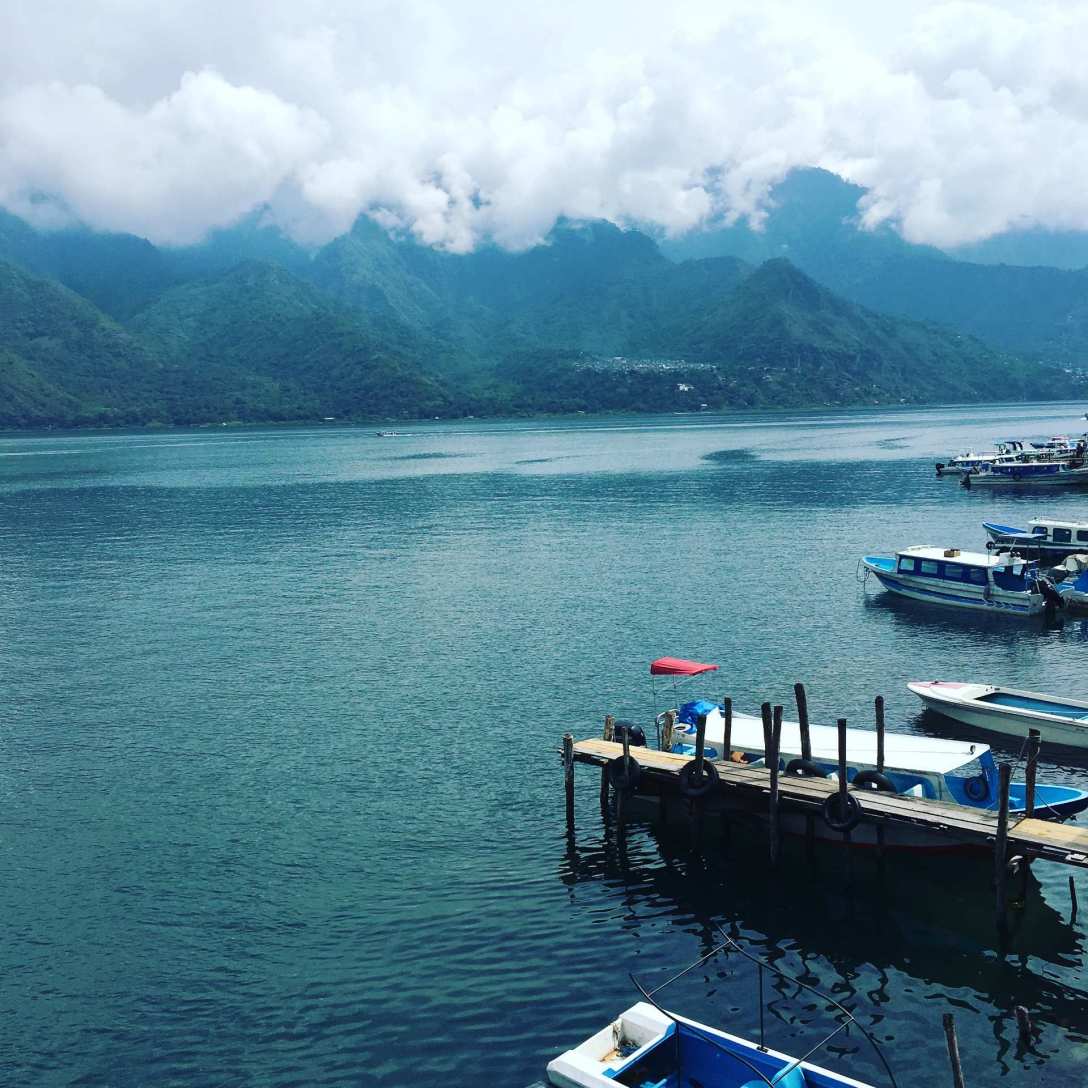 We stayed at Hostel Fe which has a bar going straight onto the lake with a cool jump onto a big air bag. One person jumps on it first, makes their way to the other end, then one (or two) people jump on the jumping end and the person at the end goes flying into the air. The hostel definitely had a more social/party vibe but you were still able to sleep well as the bar was across the road from the dorms. The dorms themselves were very basic and seemed to attract millions of flies but overall we enjoyed our stay there.

Saturday morning after our free breakfast we decided to go kayaking on the lake for 2 hours which was loads of fun and wasn’t too much hard work. We kayaked down towards Volcan San Pedro for an hour and into the open water before heading back to San Pedro. Whilst we were out we had sunshine, wind and rain but were never cold. After this we went to a sports bar ran by a guy from Dundee of all places to watch the champions league final. Here we could get a litre of draught Gallo beer for 30 quetzals. A perfect accompaniment for the footy. After the game we found a BBQ place, where we got a massive plate with 6 different meats on, rice, salad, beans and tortillas for 30 quetzals. 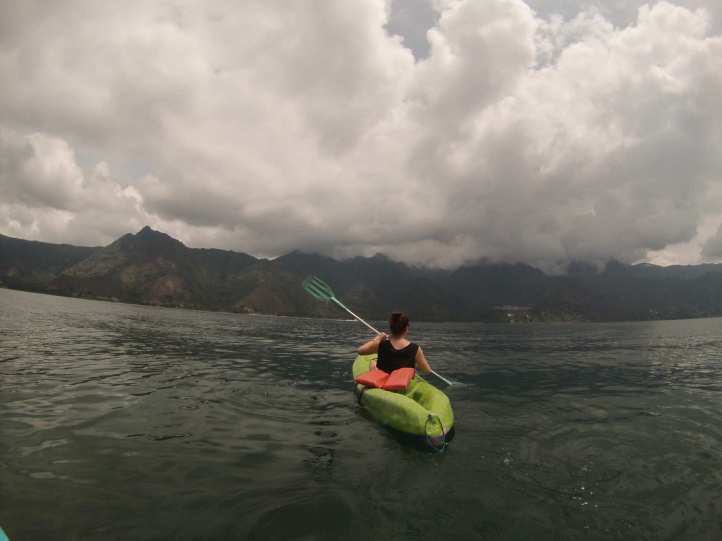 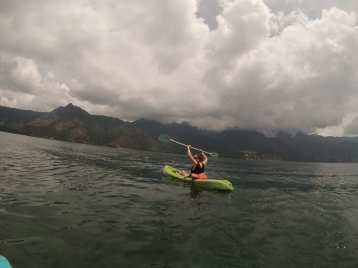 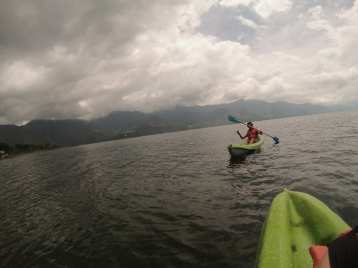 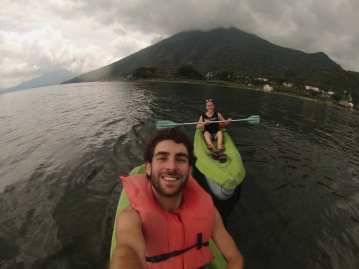 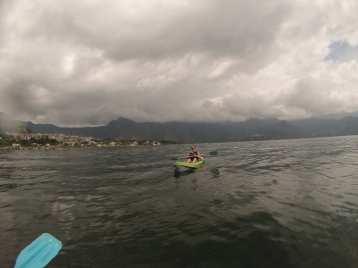 On the Saturday night we met some people from Guatemala and partied with them and a few others from the hostel at a bar/club down the road from the hostel. It was meant to close at 1am with a basement room staying open later, however that night the party shutdown at 12:45 which was a shame as it was pretty awesome.

One thought on “Antigua & Lake Atitlan”