We rose early as it was time to cross the boarder into Panama, we had been told this could take a long time if you get caught in queues so we jumped on the bus at 6:30AM. By 8AM we had arrived at the boarder crossing which to our relief looked very quiet. The first stage we paid the exit fee which only took 10 minutes, we then got our Costa Rican exit stamps at another office and to end the first stage we crossed over the impressive bridge. Once in Panama we had a customs check which involved only one of us filling a form out and a not so thorough check of our bags. Finally we got to immigration where we got our entrance stamp into Panama and that was it, 45minutes and we were done. We jumped in a collectivo with three others and made our way to the local port called Almirante. From here we got on a water taxi ($6 each) to Bocas Del Toro’s main island, Isla Colon.

We walked over to TwinFin Hostel once off the boat, where we were staying for the next 3 nights. This turned out to be a great choice of hostel, the rooms were really nice and not too cramped for dorms, they had a nice chill out area upstairs and some outdoor seating downstairs and a great happy hour! After a quick chill here we headed out to get some lunch. We ended up at a small Israeli place and we had some amazing falafel wraps with hummus and loads of salad in them too, they also came with a portion of delicious homemade chips.

Although we didn’t do it there was the famous Filthy Friday bar crawl happening the day we arrived. You start on the main island, then get water taxis to another island, followed by another bar on a third island. The unofficial party carries on at Selina Hostel till the small hours after that. Unfortunately we arrived just a bit late and didn’t fancy paying the $35 entry plus all of our drinks so we sat this party out.

With our bellies full we decided to get a short boat ride out to another island to go to the beach. As it was already half way through the afternoon we just went to the closest one (5 min boat), this beach had lovely white sand and warm clear water for swimming. Unfortunately when we got out of the water to chill and read we were attacked by sand flies and also had tiny pieces of shell in our feet, almost like splinters. So we didn’t stay too much longer after this. We got back to the main island, showered and had a few pre dinner beers at the hostel. As we met a few people at the hostel we ate quite late and eventually went for pizza with them too. Seeing the level of drunkenness of everyone who had been on the bar crawl we decided not to join the party so we had a reasonably early night after our early start.

The next day started with free breakfast pancakes, followed by a bit of thinking and planning on where to go for the day. We decided to stay on the main island and head to the starfish beach along with one other. To get here we had to get a collectivo van for about 45 minutes which cost $2.5 each way per person. From the drop off point you can either be lazy and get a boat over to the starfish beach or like we did take a short walk along the beach to get there. On the walk there not knowing what to expect we were starting to get hungry and thought there would be nothing to eat. Luckily for us as soon as we reached the beach there were plenty of paces to get some fresh seafood. We had a nice time here with some great food before a massive storm arrived which led to everybody leaving the beach at 4pm. That evening we cooked vegetarian tomato pasta and had a chilled one. A lot of the busy crowds who were in town the night before had gone and had just stayed overnight for filthy Fridays. 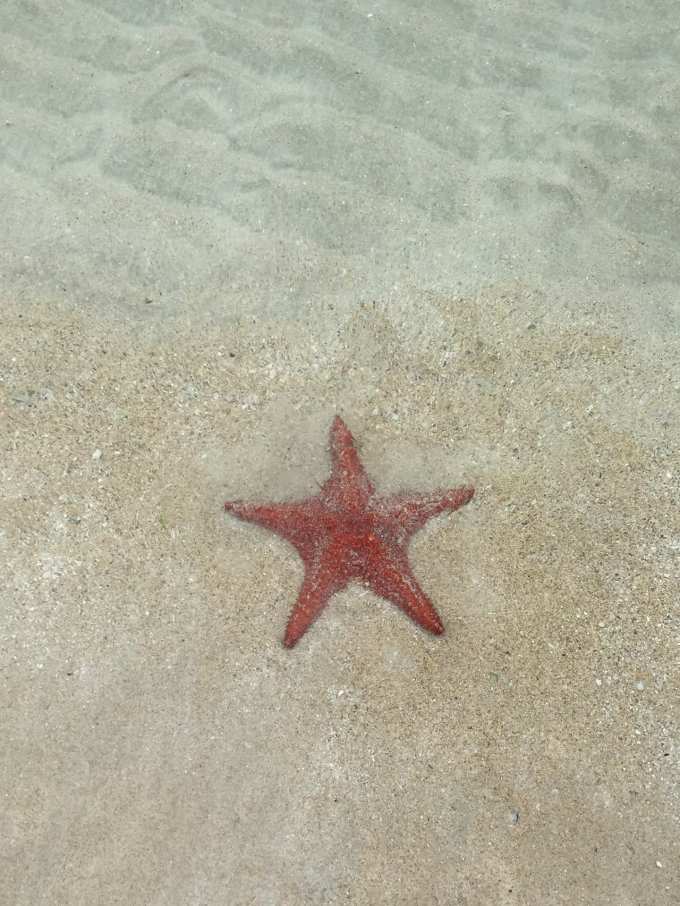 For our last day in Bocas we were unfortunately treated to a full days worth of rain. When there isn’t much else to do apart from beach activities this enforced us into a chilled out day before getting the overnight bus to Panama City. We did have time to get some food for lunch before leaving which was delicious – Caribbean style fish burritos and burgers. To catch the bus we had to get a water taxi back to Almirante, a normal taxi from the port to the bus stop and wait for a bit for it to arrive. The bus seat comfort was similar to Mexican buses however there was much less leg room. Stu was seriously debating cutting half a leg off. It made the ride fairly uncomfortable so sleep did not come easy. We arrived at the huge bus station in Panama City at 4:45am and shared a taxi with 2 fellow travellers staying at the same hostel as us.

We arrived at the hostel shortly after 5am, luckily it had a 24 hour reception to let us in. We could chill out / sleep in the common areas before breakfast and people waking up so we both found a hammock and caught up with some sleep for a few hours. After our pancake breakfast we decided to get everything sorted for our San Blas Island tour, so we walked around trying to exchange our dollars for Colombian pesos as there would be nowhere to get money out once we arrived in Colombia. After this we walked around exploring Panama City and looking for the big shopping centre where we could buy a few things also needed. This shopping centre was incredible it had a lower floor of very expensive shops (sadly not for us), a middle floor of shops with more realistic price tags for us and a huge food court with every cuisine you could imagine. We spent a few hours here then made the walk back to the hostel where we spent the afternoon reading by the pool. 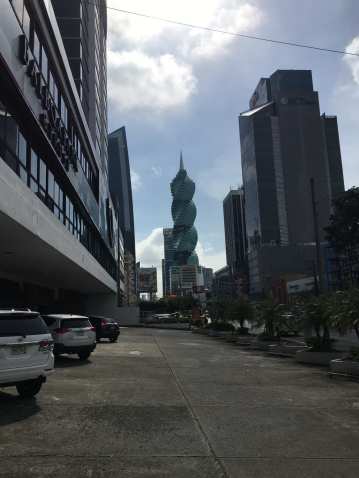 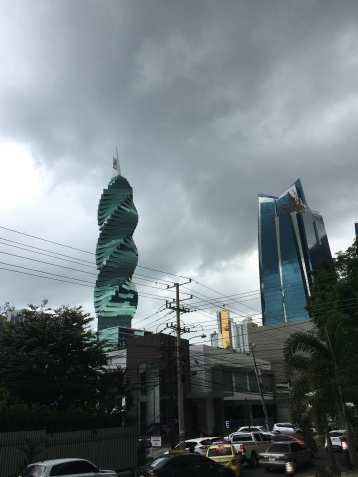 Niamh’s friends from school – Fred and Becky – were in Panama City for one night before continuing their travels, they were also staying in the same hostel. We decided to get tacos together and spent the evening catching up after far too long apart. A big group of us decided to get taxis to the old town to a great rooftop bar where the night sky was lit up by the skyscrapers in the distance. 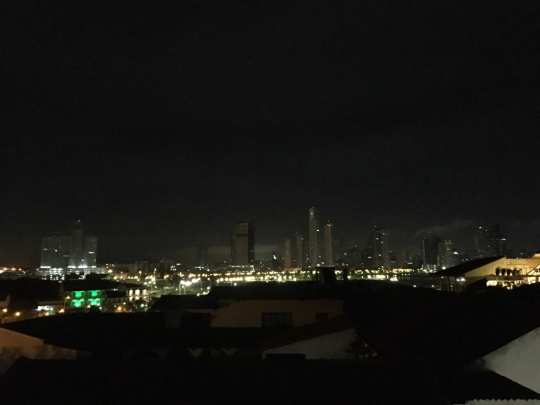 The next morning we said our goodbyes as they made their way north and we took another walk around a different area of Panama City, the old town. It was such a stark contract to the glistening skyscrappers (and much nicer!) that we spent 3 to 4 hours walking around and we managed to watch the Panama – Tunisia game which was a great atmosphere. The locals were going crazy for their team! The old town was full of old colonial buildings in immaculate condition. There was also a lot of renovation work being caried out on the more derilict buildings which was positive to see (albeit a bit noisy). At one end of the town there was a panoramic view of the new skyscrappers over the water which was pretty cool as well. Here are some of our favourite buildings below.

We decided to go to the cinema that afternoon where we saw ‘Incredibles Two’ which is definitly worth seeing if you haven’t already, it’s a funny and cheery film. The evening was spent getting all of the contents of our big bags wrapped in plastic bags in case they got wet on San Blas and getting our small bags ready which would be on us for the next 4 days. We had an early night setting our alarms for 4:30AM ready for our 5AM jeep pick up. Read our next post to hear about our 4 day adventure on the San Blas Islands.